The Allen Lane Foundation has been holding Lectures since 1979, often on an annual basis.

Many have taken place at the impressive Ismaili Centre in South Kensington, and more recently at The Honourable Society of Gray’s Inn.

Past Lecturers have included Mary Robinson, former President of the Irish Republic, The Bishop of Oxford the Rt Rev Richard Harries, and Helen Bamber OBE.

Steven Burkeman gave the 1999 Allen Lane Lecture, and we are pleased to have a copy of the text of the Lecture here in celebration of its 20th year anniversary.

The 2018 Allen Lane Foundation Lecture was held at Gray’s Inn in London on Thursday 4th October to a wide and varied audience.  Trustees were delighted that our Lecturer this year was Neil Jameson CBE, the Lead Organiser and Executive Director of Citizens UK.  The Lecture was titled “Citizens are made not born: putting democracy into action”.

The text of the Lecture can be found here. 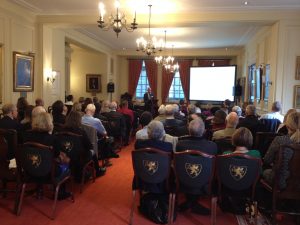 2016 marked the 50th anniversary of the Foundation.  The anniversary Lecture was given by Dame Anne Owers, Chair of the Independent Police Complaints Commission and Clinks.  The Lecture was entitled “Inside Out – Pathways to Rehabilitation”. You can access a copy of the Lecture here.

The 2014 Lecture was given by Danny Kushlick of Transform Drug Policy Foundation and titled “Improving Social Justice by Ending the War on Drugs”.

In 2011, Maurice Frankel gave a Lecture entitled “Freedom of Information: requiring decisions to be taken in the public interest”. The text of the Lecture can be found here.

2009’s Lecture was given by Kathleen Duncan OBE. “Hard Times but Great Expectations – The Current Financial Climate and The Third Sector” The text can be found here.

The Rt. Hon. Frank Field MP spoke in 2008. “Acceptable Behaviour Contracts for the Super Rich” The transcript can be found here.